The History of West Texas Jazz 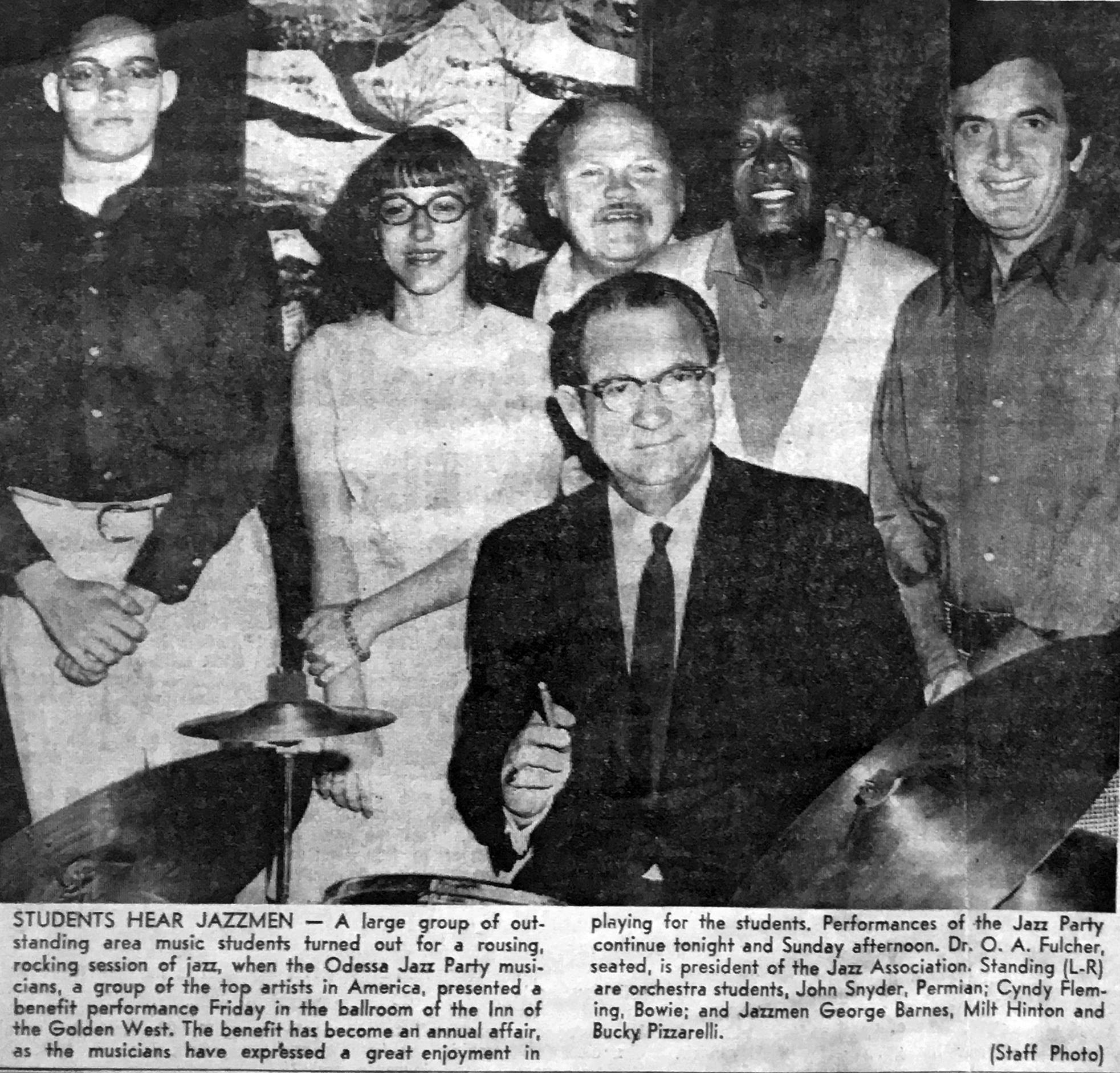 It was during a visit to Dick Gibson’s famous Aspen jazz party that Dr. O.A. (Jimmie) Fulcher first conceived the idea of bringing world-class jazz to West Texas.

Dr. Fulcher wondered why West Texas couldn’t be host to a similar party. While in Aspen, he talked the idea over with some of the country’s top jazz musicians. They liked the idea. Then Jimmie returned home and immediately set about the task of selling the plan to a number of his friends. The Odessa Jazz Association was formed and the rest is history.   The First Annual Odessa Jazz Party was held in 1967. For five nights the old Terrace Room of the Golden Rooster Club high atop the historic Inn of the Golden West provided the setting for some of the nation’s best jazz performers. 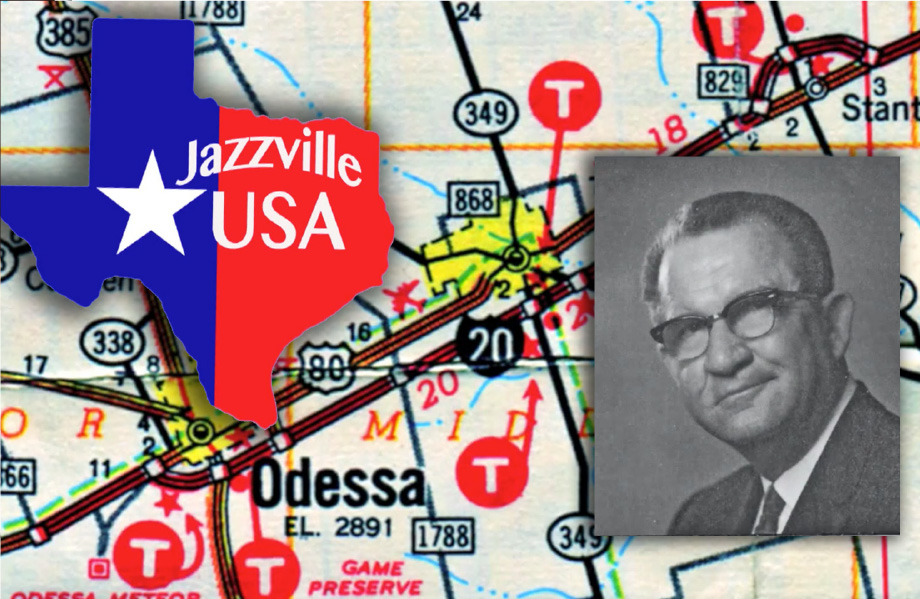 During the first party 124 stalwart jazz enthusiasts thirstily absorbed every note and the legacy of West Texas jazz was born. By the 5th annual party in excess of 350 energetic patrons from coast to coast were drawn to the jazz Mecca of the Odessa Jazz Party. In just 5 years the concept had grown from what many had considered to be an impossibility on the staked plains of West Texas into an event of national significance.   In 1977 Max Christensen and a group of Midland jazz enthusiasts formed the Midland Jazz Association and the Midland Jazz Classic was born. Over the more than 50-year history of events the two parties have hosted jazz greats from around the world.

These two friends were in one of the first interviews I did about the West Texas Jazz Parties. I have remained friends with Al White (on the left) but Dr. Robert Nixon died about two months after this interview was done. I put together the interview for his family and they played it at his memorial service in Pine Bluff, Arkansas.

They started coming to Odessa in 1972, after having been to Dick Gibson jazz parties in the late 1960s. I wish I had known Robert better. At the end of the interview, he asked me where they got paid LOL. They were great friends, and could finish each other’s sentences. They do it often in the interview segments I used. Thank you Robert. And thank you Al, for your friendship and help. 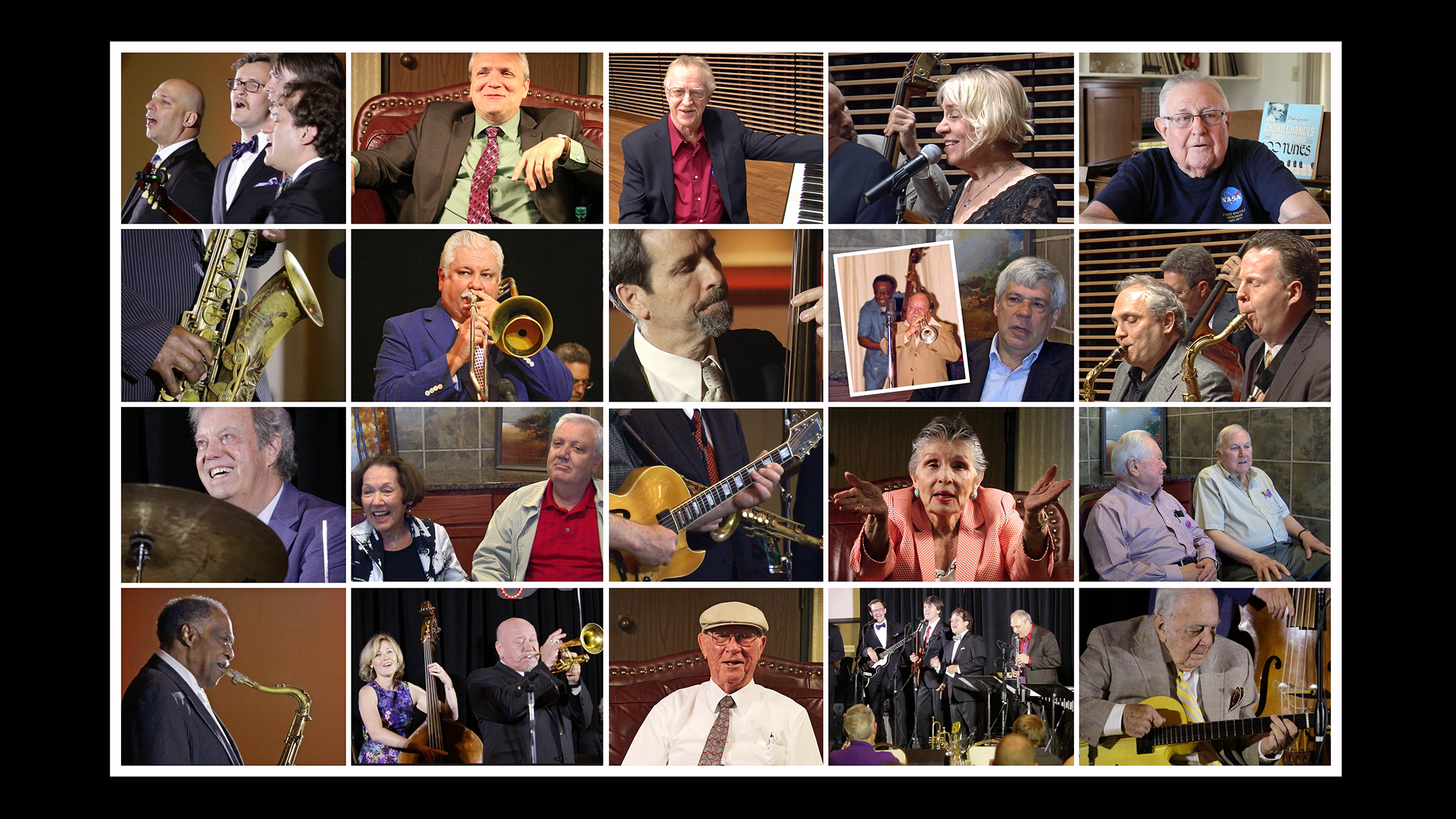 The West Texas Jazz Society founders decided early on to record music in Odessa and Midland. The music was universally outstanding – which explains why the parties have lasted 50 years. On this page, you’ll find a few excerpts of recent KXWT broadcasts featuring this music:

The 1994 Odessa Jazz Party was the 28th Annual Party, and featured six musicians scheduled to appear again in 2016: Bucky Pizzarelli, Ed Polcer, Randy Sandke, Dan Barrett, Ken Peplowski and Harry Allen. This clip also talks about how much has changed for students born in 1994, who will graduate from college just after the 50th party in Odessa May 20-22, 2016.

In 1996, the Odessa Jazz Party was 30 years old, and a few of the founding members were still around, including Ernie Schur and Dean Baker. Although Dr. John Sheets may not have been among the originals, he was the final President of the Odessa Jazz Association, and he introduced the 30th anniversary festivities. Musicians heard on this set include cornetist Ed Polcer, trombonist John Allred and tenor saxophonist Harry Allen (all attending in 2016) as well as pianist Ralph Sutton, bassist Jack Lesberg and drummer Jake Hanna.

The 50th West Texas Jazz Party Collaboration was May 19-22, 2016 at the MCM Eleganté Hotel - Odessa, Texas. Three additional parties have been held since, making 53 years.